The Complete Tales of Winnie-the-Pooh by A. A. Milne. With decorations by Ernest H. Shepard

In 1926, Winnie-the-Pooh, a collection of stories about a rather stout, somewhat confused bear, was published in England and America. The enchanting tales of Pooh, Piglet, Eeyore, Christopher Robin, and the others were an immediate success, and firmly established A. A. Milne, already an acclaimed dramatist, as a major author of children´s books. Winnie-the-Pooh  was followed in 1928 by a second collection, The House At Pooh Corner, which continued the adventures from the Hundred Acre Wood and introduced bouncy, lovable Tigger. The world of Winnie-the-Pooh is as popular today as when it first created. Winnie-the-Pooh has appeared in twenty-one languages. This deluxe volume brings all of the Pooh stories together in one full-color, large-format book. The texts are complete and unabridged, and all of the illustrations, each gloriously recolored, are included. Here are the beloved stories of Pooh stuck in Rabbit´s doorway, of gloomy Eeyore and his nearly forgotten birthday, of playing Poohsticks on the bridge, and so many more. Elegant yet simple, whimsical yet wise, this classic edition is a book to savor and treasure.

Produktanfrage The Complete Tales of Winnie-the-Pooh by A. A. Milne. With decorations by Ernest H. Shepard 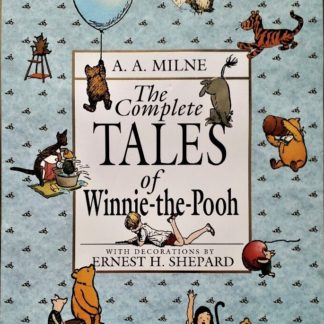 Sie sehen: The Complete Tales of Winnie-the-Pooh by A. A. Milne. With decorations by Ernest H. Shepard € 30,00
In den Warenkorb